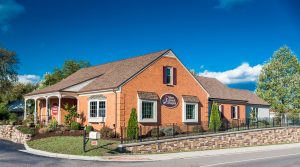 Originally founded by Dr. Edward “Tommy” Thompson in January of 1945, Salem Animal Hospital focused on providing both small and large animal medicine. In 1973, after working as an Associate for several years, Dr. Allen R. Bryant purchased the practice and continued the same level of personal, compassionate care. Due to continued growth, Dr. Allen Bryant built the existing facility in 1982 and began to shift the focus of the practice to strictly small animal. Dr. Rich Bryant and his wife, Danielle, purchased the practice from his father in January 2008. Under their leadership and taking what they learned from Dr. Allen Bryant, Salem Animal Hospital has grown into the practice that it is today which includes 3 full-time doctors and 12 support staff members.

In August 2003, after many successful years in management with Verizon, Dr. Rich Bryant, affectionately known as “Dr. Rich”, began the journey to a new career when he entered the Virginia-Maryland Regional College of Veterinary Medicine at Virginia Tech. With the support of his wife, his sons, and his extended family, Dr. Rich graduated with his medical degree in May 2007 and joined his father at Salem Animal Hospital as an associate veterinarian.

In 2008, he became a Certified Canine Rehabilitation Practitioner after completing a program at the University of Tennessee College of Veterinary Medicine. Being able to collaborate with clients in order to provide the best care possible for their pets throughout their lives is challenging, but Dr. Rich enjoys establishing close relationships with both his patients and clients.

Salem Animal Hospital welcomed Dr. Jordan Weintraub, as an associate veterinarian in May of 2018. Dr. Weintraub graduated from the University of Missouri College of Veterinary in May 2018. He enjoys surgery as well as working up an array of complicated cases.

In December of 2019, Salem Animal Hospital welcomed Dr. Christine Ferris as an associate veterinarian. Dr. Ferris graduated from the Virginia-Maryland Regional College of Veterinary Medicine in 1995. After practicing in the Roanoke area for several years, she opened and operated Companion Pet Care Clinic in Salem from 2001 to 2017. When the opportunity to return to Salem and work with Dr. Rich Bryant arose, she jumped at the chance. Watching her patients grow from an adorable puppy or kitten to a precious, graying senior is her favorite part of the job. She feels she becomes a part of the family and treasures the relationship formed with both the four and two legged members.

Dr. Rich, Danielle, and their team strive to maintain a “hometown” culture within the practice while simultaneously providing the highest levels of modern veterinary medicine possible. They have built an exceptional team that focuses on providing excellent patient care as well as growing the Salem Animal Hospital family, from client to staff to the pets whose care is the very core of their practice.

Font Resize
Contrast
Accessibility by WAH
Call Us Text Us